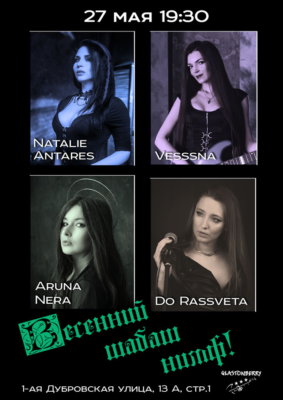 How is this project born? What was your vision when you’ve started?

The idea to create a project «named after myself» was born long ago, when I realized that my former band Fright Night would not last long. But then I had neither the strength nor the money to record — I was getting a second education and almost did not work. So I just had to write sad songs in my free time) Although initially I was not going to play in exactly the same style as I played with FN — gothic metal — I wanted to do something more commercial .. something more alternative … but I am me .. This is my style, my vision of music … I am too fond of complex and dark things to deny them, even for the sake of popularity).

How did you come up with this fascination for gothic metal and dark rock?

I came to this style at the age of 17, after a long passion, first in alternative music and grunge, and then heavy metal. Before that I played in a couple of girly all-female punk and heavy bands, but it all ended quickly. And then I decided to seriously take up my mind, and look for a band either in the style of doom metal or gothic … in my first doom band I was at first just a guitarist, then I began to write songs, and not just individual solos … then When we couldn’t find female vocals for a long time, I decided to try singing myself, although I had no experience at all. At first, I didn’t do much, and my vocals were completely different, not like now. Gruffer, closer to post-punk. I learned to sing for a very long time in order to sound at least normal. I love gothic fashion and aesthetics. As for the music that I compose, of course, gothic metal is just a very conventional designation of the style. I myself listen to a lot of music in various genres, all this has some kind of influence on me. This is probably why in many reviews it was noted that in our music «there are no typical clichés characteristic of gothic metal.»

What are your biggest musical references?

As I said, I myself listen to a lot of different music, and my favorite group is Diorama, which is generally far from our style). As for the bands that we would like to focus on in terms of sound and general style — then, probably, Flowing Tears, which, unfortunately, no longer exists, but I really really like their recordings, and the songs themselves, and the voices of the vocalists — everything is amazing! Well, also Madder Mortem. They are, of course, heavier. But I really like their stage presence, energy, vocalist’s voice, sound.

Why did you choose to reissue ‘Almost A Saint’?

Basically, of course, for those of our fans who tortured us with the questions «why are there still no CDs»? … well, and for mailing as a promo. Also, I don’t lose hope that someday the borders will be opened, and we will be able to perform somewhere abroad, so we would not go empty-handed to the new places.
Did you change anything of the original release?

We just decided to add our EP to the album — so that the fans now have definitely collected all our work, published at the moment.

What are your best memories of those recording sessions?

I think my most strong memories are always related to the recording of drums. When you see that your songs from the drafts are finally starting to take shape. I like working with Andrey Ishchenko — he is a former drummer of Arkona and, perhaps, the best drummer in Russia. But I wouldn’t work with him if he wasn’t also a great person. Therefore, there are always a lot of positive emotions at the beginning, and this gives strength to move on and try to complete everything faster and better. I also really enjoyed playing a difficult melody on the acoustic guitar for «You Can’t Leave You Can’t Stay» — I rehearsed it for a long time, literally day and night, in the end everything worked out very quickly and smoothly in the studio. Also on «Doom» a member of the group Stillife plays a violin solo — this is one of my favorite bands, and I was very pleased when they themselves offered to cooperate when they learned that we were looking for a violinist to record. In general, every day spent in the studio leaves a pleasant feeling that things are moving, and it’s not in vain.
What kind of sound did you want to obtain? Did you use some particular templates in terms of production and mixing?

We didn’t have any templates, moreover, our sound engineer, although he listens to rock, works mainly with pop and rap artists. But this does not prevent him from being well versed in equipment, guitar sound and general mastering. We have been working together for a long time, and I see that his ability to «make good sound» is improving every year, we, in turn, are also growing. For me, the main criterion for a good recording is the most clear audibility of all parts, all instruments — and there are a lot of them, we have complex arrangements. Few sound engineers want to bother with this. But I am always present personally during the mixing process, and we succeed). I like it when the sound of riff guitars is very heavy, «tube», but readable. As in heavy metal, rather than as it is now fashionable with modern bands, where everything is blurred and compressed to the limit. We use two different guitars for the riffs, so there are usually 4 tracks. Also I am against any copy-paste and grid alignment of tools. We try to use this only in the most extreme cases. The only thing that I would like to improve in the future is my vocal skills, I want my voice to sound more bold on the recording. We may not be using that much reverb.

The title track — «Spring» evokes associations with «masculine» gothic rock such as Lacrimas Profundere, etc. Musically this is a very cheerful thing, although the lyrics are quite philosophical. It was written in 2011, partly under the influence of the book «Shut a final door» by the wonderful writer Truman Capote, partly because in one of my friend I saw an almost complete likeness of the main character of this sad story. That is, a person lived, constantly blaming others for his failures, everything around was always wrong and wrong … changes begin in our head, and not in the world around us. But it is easier to suppress all doubts and good beginnings in oneself — after all, all the same, all this is useless. Indeed, it is very easy to succumb to such a mood, but as long as we succumb to it and do nothing — we lose friends, loved ones, new opportunities … Then all that remains is to remember and regret — and, perhaps, “Regret” is a truly appropriate name for this song.

The lyrics for the song «Let yourself Be Broken» was written a very long time ago, when I was 19. Then, however, some of the parts of the lyrics were changed. There are a lot of metaphors in it, and in a nutshell I can’t explain what this song is about. But if I really try — about non-resistance to the evil and cruelty of the world around us. Perhaps this is one of my few POEMS, and not just lyrics. Musically, here I was strongly inspired by the fast songs of Anathema.
By the way, both of these songs were the last songs I worked on for this album. Apparently, that’s why they are so fast and restless … I wanted to get everything done as soon as possible!)

What do you aim to create with lyrics in general?

All my lyrics are just my thoughts and feelings. If these are songs about relationships, then these are perhaps the saddest lyrics. There are a couple of songs with pretty fairy-tale imagery, but, again, with elements of gothic drama. I don’t sing about politics and everything like that, I don’t call encourage anyone to anything and I don’t strive to prove something.

Are you working on a new full length? What are your plans for the next months?

Yes, I try now to devote as much time as possible to the recording of the new album. So far I am at the stage of recording vocals. All instruments are recorded. Hopefully it will be done by the end of summer or autumn. We are also working with the director on the script for the next video. We will try to bring all ideas to life.

How did you meet Marina Scherba? How is the relationship with her?

We met as early as 14 years ago at one night gothic party, where each performed with her own group. We started to communicate. Marina is like a sister to me. Then she took part as a keyboardist in my former band Fright Night, and we also had a joint project Mea Vita, in which she is the vocalist and the author of most of the songs. Now this project still exists, but in a kind of studio, «frozen» form. She also helps me with creating keyboard sounds for Vesssna, that is, we still collaborate in the studio, but she has not played live with us yet.

You’re so beautiful and talented. Ever thought to work as model or actress?

Thank you! Of course, I thought about it in my youth, but music and studies took all the time. Then I realized that I could not. Being an actress or a model is waiting for you to be called, to be chosen. I like to lead the process myself more — and when we shoot videos, everything is built around my image. I myself choose what I will wear, with whom I will cooperate, etc. For photo shoots, I also always choose the style, locations and everything else myself.

How much important are look and make-up for you? Where do you buy your clothes?

I think for a rock musician this should be important in principle, especially if he does not play punk rock and indie, but gothic or something like that. This is most important at photo shoots and live shows, but in real life, a person must adhere to the style that is close to his soul and corresponds to his activity. Thank God, I do not work in an office, I do not need to follow «double standards», I can afford to wear ripped jeans and bright makeup every day. The hardest part is finding time for this makeup. I’m still studying to be a make-up artist, so I constantly try to train, using for it myself as well). I really love beautiful things — jewelry and clothes. I’d say I collect it. But I rarely manage to buy something really cool in an ordinary shopping center, usually the prices are now quite high, even for complete garbage. So I buy many things at online flea markets, fortunately, in Moscow it is all very well developed, and I also buy much jewelry from hand-made masters.

Can you suggest any other cool underground russian acts that deserve our attention?

I could advise my friends Inner Missing, I think you will like it. More bands: Tantal, Stillife, Cyber Snake.